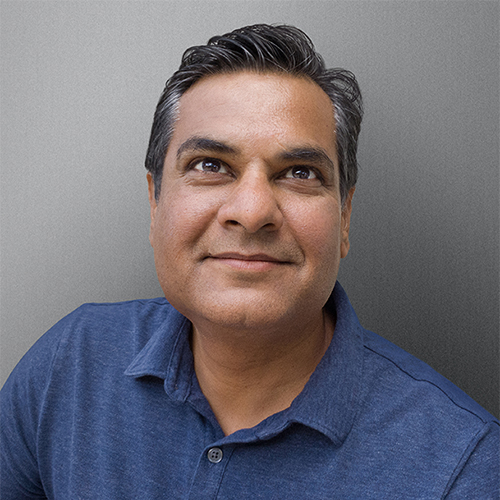 Apoorv Saxena grew up in Nagbur, a small city in India, where his parents were both teachers. “We worked, we saved, we lived frugally," he recalls.

Saxena first came to the U.S. after college, when the company that he worked for sent him to Odessa, TX for four months of training. He arrived with $100 in his pocket—all that he and his parents could spare from their savings.

For Saxena, Texas in the late 1990s was a revelation. “I was the only person of color there," he remembers. “I was literally lost, but the people were very friendly." Unlike India, where there were limited opportunities for people to enter the tech sector, the U.S. was in the middle of its internet boom. After visiting some friends in Silicon Valley, Saxena realized that tech was the growth industry of the future—and he needed to get into it.

In Silicon Valley, Saxena learned about artificial intelligence (AI) and quickly grasped its potential for transforming the world. Because of AI's ability to marshal large amounts of data, the tech industry had become able to seamlessly integrate itself into the lives of billions of consumers, affecting the way they shop, find information, consume culture, and perform hundreds of daily tasks.

Unfortunately, many AI tools were difficult to use, which largely restricted its growth beyond the tech industry. Saxena realized that, if AI was truly going to reach its potential, it needed to be made available to everybody and integrated into a much broader range of industries.

“It was an 'a-ha' moment," he recalls. “I realized that AI had applications far beyond technology, particularly in financial services."

Like the tech world, financial services is inherently data driven, and it has millions of customers who rely on highly-personalized services. With AI, Saxena reasoned, he would have the ability to expand what financial services could offer to customers. The next step was finding a company that had the potential and resources to make the most of the new technology. JPMorgan Chase, he decided, had the tools, talent and strategy to transform the industry.

“When I first came here, somebody asked me why I joined JPMorgan Chase," he recalls. “I answered 'Why aren't there any banks that serve a billion customers?' Many tech companies serve a billion users, but there aren’t any banks that do so. The reason is that tech can do it because they use AI to provide highly personalized services at a very low cost. I think banks can do the same."

My dream is that, one day, every person in the world will have access to low-cost, highly personalized financial services—like bank accounts, business loans, payment accounts, personalized loans, and all the other bank services that many of us take for granted. It's a big dream: right now, there are about seven billion people on the planet, and almost a third of them don't have a bank account. The only way you can provide financial services to 7 billion people is by doing it at scale. And the only way to do that is through AI.

JPMC is an AI first financial services firm, which means that we use AI to run our business in every possible way. Right now, my team is building technologies that will democratize AI and make our products easier to use. For me, success would be helping JPMorgan Chase to fully integrate AI into banking, bringing it to our customers—and the world.

My parents. My father taught me to be curious and to have a great work ethic, and my mother taught me about the art of servant leadership. Unlike a traditional leader, who puts himself at the forefront of an organization, a servant leader is focused on outcomes, rather than praise. Put another way, the goal is to change the world, not take credit for changing the world. My mother's lessons on servant leadership taught me the value of empathy, and of helping others to gain success as we all work towards the same goal.

I was working on a project at a consulting firm. It wasn't going well—as a consultant, I didn't have any authority to put my suggestions into play, and I struggled to communicate my ideas and influence the decisions that the group made. I soon realized that my job called for skills that I was weak in.

My mentor saw me struggling, took me aside and said, “Apoorv, if you want to be successful in life, double down on your strengths and be sure your weaknesses don't kill you."

My obstacles have mostly been internal: I do not let others define who I am, I don't do very well with ambiguity, and I don't do well in overly structured environments.

As I've developed in my career, I've purposely put myself in situations where I was out of my comfort zone so I had to work even harder to be successful. I pursued unconventional projects because I knew I had the skills and talents to make them successful. I gave myself the freedom to take leaps of faith.

Work-from-home, go to the office, or a mix of both?

I'm one of those people who wants to have a mixture of both. Working from home has proven very successful—I didn't think that we would be so productive. As for my team—well, all of us have really stepped up to the plate. At the same time, I think that the hallway conversations and the human interactions in the office are very important. I'm eager to get back to the office, but I'm also very curious to see how telecommuting is integrated in the future.

Is there anything else you're eager to tell people about?

I believe that this is one of the most exciting times to be a technologist. Transformations like the AI revolution don't happen often. To be part of that journey and defining that outcome is quite exciting.

This transformation requires a different kind of leader. The next generation of financial services leaders need a deep understanding of both business and technology. It calls for people who are very technically savvy and who also understand customers.

Tech companies are filled with those sorts of leaders, but the financial services industry has, historically, focused more on people who understand the business but are not as adept at tech. I think I'm part of a change that's happening in the industry. We've built a team of 100 dedicated people, which is a testament to how committed JPMC is to the products my team and I are producing. The industry is changing slowly, but surely, and that is a very positive thing.