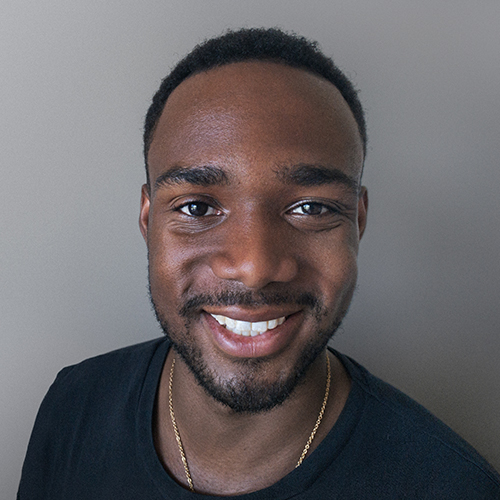 Tionne Barmer has made it his life's mission to pave the way for those coming up behind him. As a first-generation college graduate with seven younger siblings, he learned the value of support and mentorship early on. “I think it's overlooked, but so important, to have someone close to you in age who can help," he says.

And he's put his passion to work: Soon after joining J.P. Morgan as an Asset Manager, he returned to his alma mater, Duke University, to serve on a diversity panel for new recruits. He has also led the bank's Summer Analyst Champion Program, and recently helped his team respond to COVID-19's impact on the market.

Success has always been the ability to influence people younger than me, to be a good example and a leader. If I'm five years into my career, I just imagine myself being a college student, looking up and saying, “That's someone I look up to, and want to exemplify and can relate to."

I have to say, 100 percent, my parents have been extremely supportive the whole way. I did a lot of extracurricular stuff, and they were always there for it. But I had a teacher in fourth grade, Ms. Williams, who I think was one of the first people to really believe in me in an academic setting.

I had just moved into a racially integrated neighborhood in Baltimore. Before that, I lived in an all-Black neighborhood, where everyone was the same, and we didn't really see any differences. But when I switched schools in fourth grade, I was the only Black student in my class, and I realized that society might see me differently. This is so nerdy, but, I was in this history competition, where I had to memorize history facts. Ms. Williams invited our team over to her house to practice.

She was the first person to sit down with me, work with me on a personal, one-on-one level, and empower me. That was a critical moment in creating my identity. I remember, at that age, it was very important for me to feel included and have someone who believed in me.

You're the best at being yourself. When you see all these icons who are great, you grow up and you idolize them. You'll never be this person, but you can be Tionne, or whoever you are. So just be the most true and excellent version of yourself. I think about that every day. What am I good at? What can I bring to the world? Understand your genuine disposition, and bring that to the table.

What has been your most important work?

At Duke, we had a “Minorities on Wall Street" event that I helped facilitate, and it still goes on today. We brought in investment professionals from every company — Goldman was there, Wells Fargo, JPMorgan Chase and others. They came and spoke to everyone who was a minority. Students would usually find mentors and get direct internships through this program. The year I worked on it, we got more firms to come, and we got more funding for it, to make it more worthwhile.

I used to be a track and field athlete in high school and college. I was a sprinter. I'm not sprinting through New York City but I'm still working out, and just going on quick little runs or walks. I'm very adventurous. Before this pandemic hit, I went sky diving for the first time. I jumped off this stadium in Durban, South Africa—Moses Mabhida Stadium—which has the world's largest rope swing.

What advice would you give to a new employee?

Don't be afraid to ask questions. I feel like people want to make sure they look smart and capable but it's very, very important to learn as much as you can the first year. Be a sponge. Be extremely intellectually curious. Sit down with people, and don't be afraid to ask them the burning questions that you may have. This is the best time to do that.

Where will you be in 5 years?

I really believe in this: You don't just want to be part of the team. You want to be the reason it happens. We have this term, Culture Carrier, at J.P. Morgan. I really want to be one. J.P. Morgan is so good at giving everyone a platform to share what makes them tick, and giving them the opportunity to grow. We're the biggest financial firm and have all these divisions. By virtue of numbers, we're bringing so many diverse thoughts and opinions together in one place, which is really cool.

In 20 years, hopefully I'll be an expert at something. Right now, I'm in a very broad role but hopefully, I'll have expertise in one or two things and be a true leader.