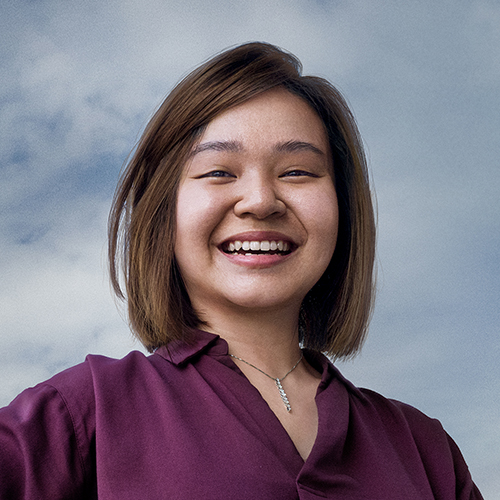 It's been a while since Lianne Lee has been to the beaches of her hometown, Malaysia. That's where her dad, an experienced diver, taught her about the peace—and excitement—under the waves.

At first, Lee's father didn't want to expose her to the diving life. "During his time, divers had a culture of smoking, so he didn't want me to get into it," she says. "But he couldn't stop me from diving."

Diving has become, for Lee, a peaceful point of duality for life on land. When she feels the onset of indecisiveness, as she often does, she'll take a short trip to a spot she's found in Singapore to get her underwater fix and clear her mind among the sea creatures, who couldn't care less.

I feel successful if I'm happy and healthy, if I'm able to be with my loved ones, my friends and family, and also if I have the means to give back to the community, or to the environment. When I was in university, people kept saying success meant retiring at 30. Now I don't see that that's really possible. I think it's important to just live life, go with the flow, live in the moment and not stress too much about it.

This would definitely be my dad. He has his own business—not super huge, but he's very entrepreneurial. I want to be more like him. I'm not an entrepreneur, but I'm definitely a self-starter. When I make decisions, I go to him for advice.

My dad always says that I should keep reading and never stop learning. When he was young, the British still had a huge influence in Malaysia. English was the first language, and then he learned Malay. He spoke a Chinese dialect, but he never formally learned Chinese, and always wanted to. So, when I grew up, I saw him in his 40s or 50s, studying Chinese and learning a new language, which I thought was quite cool.

I was going to say, deciding what to eat every day. [Laughs] But seriously, I'm quite indecisive. The biggest obstacle is always making decisions, whether it's career moves, or what I should study. I did a double degree because I couldn't decide which I wanted more. Even since high school, I chose subjects I didn't even need to take. I used to take additional ones, like art and literature, because I was curious. Then in university, I decided to do software engineering and finance. Now I'm doing an MBA because I wanted to learn more about the different areas in the business.

I usually ask for advice from people who have passed this stage in life, my mentors and my dad, my family, but I also look to my younger siblings. Our view changes as we go through life, so I think it's a good idea to also look at the views of younger people. Ultimately, I know it's up to me to decide what to do, so I've learned over the years: Don't stress too much. It doesn't have to be the same thing that you keep doing until you're old. You can still learn to explore new things. I don't want to say I overcame this obstacle, but this how I'm dealing with it.

Definitely being underwater, diving, which is cool physically but also mentally. You get to relax. I like to see nature on a different side. I like to see fish and the living creatures there, seeing them not minding us at all and just doing their own thing.

Where will you be in 20 years?

In 20 years, I think I want to look back and check: Am I still successful in the same way I said mattered to me before? Am I happy, being with loved ones, doing what I like?