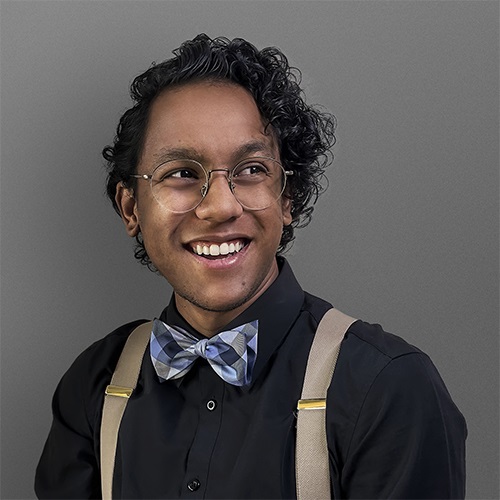 Rider Stark grew up in a large, diverse family—an experience that, he says, taught him to love communicating with people.

Stark, who is Vietnamese and African-American, was one of five children adopted by a white couple. The children were all from Asia or Europe, and their mix of ethnicities baffled many of the people in his community. The experience of dealing with that confusion taught him the value of treating others with kindness and consideration. “As a little kid, I thought everyone's family members looked different from each other, the way mine did," he recalls. "But as I got older and realized that's not true, I learned that it doesn't matter where you're from. What matters is who you are as a person."

Today, Stark works for Chase in Rancho Mission Viejo, California, where he serves as a Relationship Banker, or "Banker Tour Guide," as he likes to put it: "I help my clients with their banking needs and then I tell them where to go in the area for a nice hike or a cool restaurant."

Who has been the biggest influence on your life?

Either my dad or my sister. When my dad first adopted my older brother and middle sister, it was very strange for them to walk around together as a family because they are all different ethnicities. A lot of people stared and had questions. The way he handled those sorts of interactions taught me how to communicate with others.

My middle sister, who is Korean, went through a lot of racism and discrimination growing up, and then again when she entered finance as a woman. She's been through the gamut, and anytime I need advice, I know she will give me her real and honest opinion.

My sister told me that people are going to be whoever they are. They may be great or they may be lousy, but you can't let people change who you are.

I am a very loud, animated person. I put my own twist on my work and make it fun because that's who I am. And my sister taught me that that's enough.

In 2014, I was in a motorcycle accident and ended up with fractured vertebrae, a bleeding brain, a collapsed lung and shattered bones in both my arms and both my legs. Recovery took two years and nine surgeries. I was in a coma for two to three weeks and had no memory of who I was from before that day. I had to learn who my family was, who my friends were, what I enjoyed. Today I have about 80 percent of my memory back.

How do you build relationships with your clients?

It's not just banking so much as building a relationship because—let's be honest—money is money. Everyone understands that being wealthy is great and not having any money is hard. But understanding someone's individual situation is crucial. Being able to say, "Ok, you have two kids, you're working, but you're also paying for private school, so maybe taking out a big loan doesn't actually make sense for you." That's the difference between dealing with numbers and an actual person.

Can you share a story of an instance when building a relationship really impacted you?

I have a client I met three years ago, a guy who was starting a business with his two partners. They each put in about $10,000 and said they would just see what would happen. In that first year, I remember working closely with them, and just trying to help out where I could because they were a start-up with limited funds. He'd come in sometimes to make deposits or go to the ATM, and he'd stop in my office, and we would end up chatting.

Three years later, his business is doing phenomenally well and is projected to grow to a value of $17 million this year. He asked me about getting a mortgage, building a line of credit, etc. I told him we needed to make sure that it actually makes sense to do them right now, so I pulled together a meeting with him and the team I work with at Chase and we talked it through.

Afterwards he said to me, "You might be half my age, and you might be a banker, but I trust you, perhaps even more than myself right now." His wife, his kids and his business partners all know me by name, and he refers people to me. That's really amazing to me, to be able to have that impact on him.